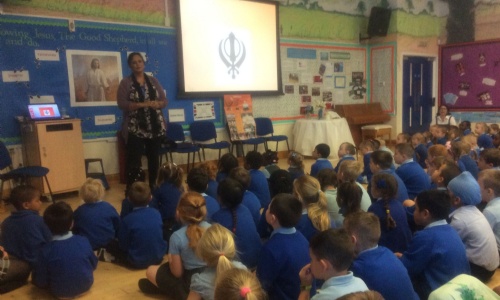 She explained about the key principles of the religion, including that they have a founder called Guru Nanak. We know that they follow the teachings of 10 Gurus and believe in one God. We looked at the Gurdwara as a Sikh place of worship and learned that there is a famous Gurdwara called The Golden Temple, which is in Amritsar, which many Sikhs pilgrimage to. She also showed us the Khanda, the symbol of Sikhism, which can be found on the Nishan Sahib (an orange flag which flies on the Gurdwara).